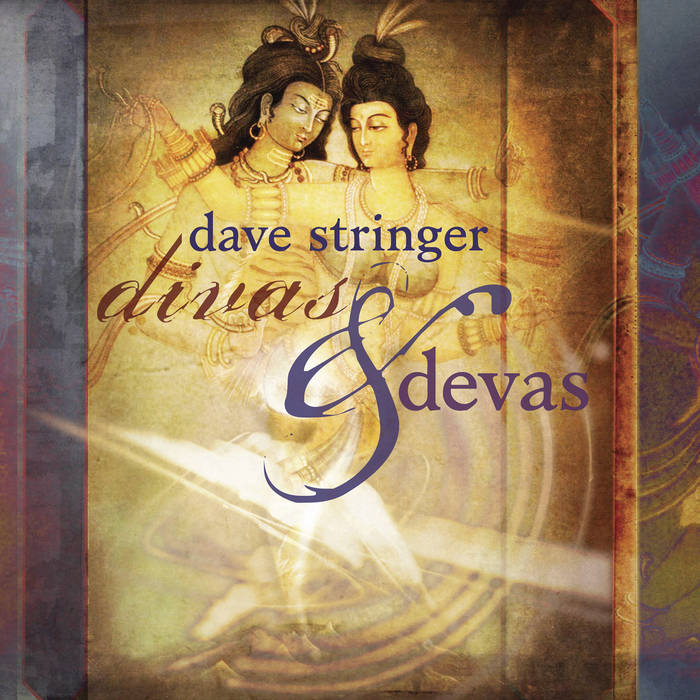 “Elegant and engaging, a timeless piece of art”
--- Yoga Chicago

“Eloquently mixing the spiritual mysteries of the East with the grooving rock of the West, Dave Stringer is more than just a devout seeker of musical wisdom and beauty—he's a unifier. By the time you've reached the final, blissful "Saraswati Ma," with its gently strummed guitar, slow percussion, and gorgeous harmonies, you can take off into the celestial realms of timeless, perfect love.”
--- Daily Om

Divas & Devas is a CD of East Indian bhajans, sung as male-female duets, in Sanskrit, Hindi and Marathi. The overall feeling is romantic, with the intimate interplay of masculine and feminine gesturing toward the larger relationship of the human and the divine. You can play the CD for spiritual effect if you like, but it also works great as a soundtrack for making love.

The instrumentation is an airy and eloquent blend of Indian tablas, sitars, and tambouras with Western guitars, cellos, and trumpets. Whether the songs melt into you like smooth Sarah McLachlan-flavored balladry—as on the gorgeous "Gunghata"—or power up your lower engines with hot rock steam and black orchid incense, the unshakable foundation of faith and bliss remains intact.

"During the time that I lived at Gurudev Siddha Peeth in Ganshpuri, India, many notable bhajan and qawaali singers passed through the ashram. I was very moved by the ecstasy and the stillness that radiated from them. The words they sang were written in India centuries ago during the era of the bhakti poet-saints, but they still spoke to me in a voice that seemed clear and modern, and these words continue to inform my thinking and my practice. In this recording, I have set some of these poems to my own original musical compositions. Other songs come directly from the rich musical tradition that has been transmitted to me through the lineage of Siddha Yoga, for which I will always feel a sense of deep gratitude.

The English word diva conveys a number of shades of meaning, some complimentary and some pejorative, ranging from accomplished artist through demanding ego. The origin of the term, however, is the Sanskrit word deva, which means luminous, shining, god, or heavenly one. And it is toward this original meaning that much artistic expression ultimately points. For me then, the title of this CD, ‘Divas and Devas’, refers to the relationship of our limited sense of self to the expansive awareness that we call divine love, as one reaches toward the other. According to Kabir, all life is an interplay of two spiritual principles: the personal soul (Jivatma) and the universal soul we call god (Paramatma). It is Kabir's view that liberation is the process of bringing into union these two principles.

This dance of the ego and the divine can be found in our most loving and intimate relationships. To see god in one another is one of the principal directives of yoga, seemingly simple, and yet one of the hardest to fulfill. It is said that the experience of divine love is always available within us, but we are blinded by our sense of smallness, of difference, of powerlessness. Seeking to transcend these illusions, grace is the force that we turn to, and compassion the quality we cultivate. Love is thus both the process and the product of our passage. And music is one of the most exquisite means we have to express it."

Special Thanks:
To Dearbhla Kelly for her patient love, careful listening, honest feedback and devoted support during the writing and recording of this record. To Kim Waters for the gracious hospitality and ministrations that helped smooth the recording process. To Antoine Bonsorte for making his beautiful house available to us as the primary recording studio. To Swamis Muktananda and Chidvilasananda for introducing me to the words and wisdom of the poet-saints of Maharashtra.