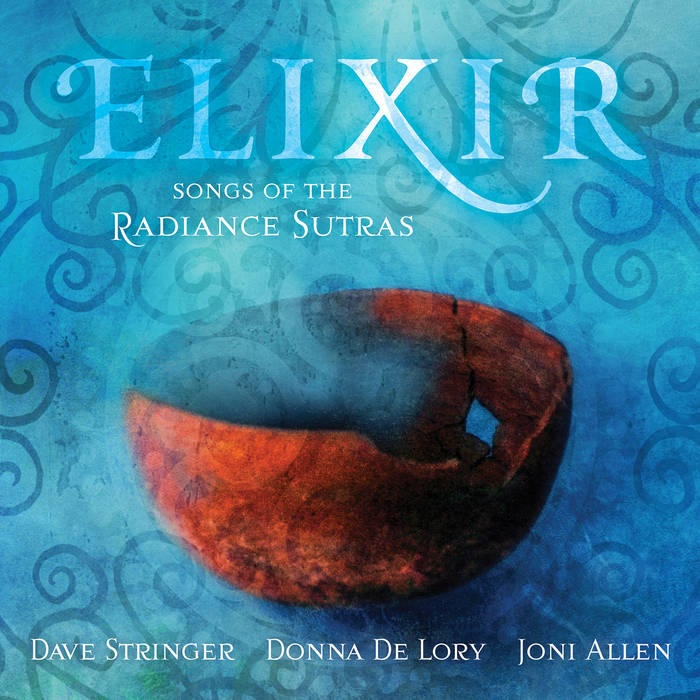 "Upbeat, at times bluesy and always ecstatic. The rapture of music and movement, the insistence in going toward "what you love" is fervent and inviting. This is a truly unique and inspiring project, perfectly realized with an eye to the sky, an ear to the earth, and all hearts to the One. These are songs to be danced with and meditated upon. 'Raise your glass, close your eyes, and toast the universe' with Elixir." --- Lloyd Barde for Common Grounds Magazine

“I’m so in love with ‘Elixir’ I can hardly stand it — I bought the book.” — Kitzie Stern (New World Kirtan Podcast)

Denise Kaufman introduced me to the verses known as The Radiance Sutras in 2007, at a surfing, yoga and music retreat we were collaborating on in Mexico. High on a cliff above the Pacific, twilight ascending and waves crashing below, we were singing in a circle, improvising melodies, trading phrases, dancing, drumming. The words spoke so eloquently of our ecstasies and agonies, and from a point of view so unbounded by them, that I was literally leaping with joy. I sang the Sutras until they sang in me.

Coiled intricately in meters of Sanskrit, the verses of the Vijnana Bhairava Tantra sit in a state of potentiality. They spring into life as the translator teases out their meaning, or the singer beckons them, cajoling them into an act of intimate congress. They are reckless and modest, self-assured and self-effacing, bashful and bawdy. They want to be danced with, and meditated upon. They love to get up early and chant at the temple, and they also love to go out for a night on the town.

Capturing Lorin Roche’s electric, poetic riff on this sacred text in a recording meant taking an approach that was faithful to the meaning of the Sutras but also left us free to experiment and play. For five years, Denise, Joni, Donna, Lorin, his wife Camille, and I workshopped an enormous number of the Sutras. We recorded the jams with many different participants, noting the patterns that recurred, and the most memorable moments.

From 2012 to 2014, we composed the songs in intensive bursts, recording them while they were still fresh, letting them simmer in between sessions. Lorin encouraged us to play with the poetry, creating rhymes where needed, or adding words to clarify the concepts. In this way, the Sutras continued to uncoil, metamorphosing from a densely packed caterpillar of Sanskrit DNA into living wings of culture, taking the form of bhangra grooves, country anthems, and sultry ballads.

It is astonishing how much art, joy, and originality of expression arises in the people who get up and rock a Sutra at our workshops, many of them reciting poetry with musicians and a crowd for the first time. I learn so much from them. The songs we bring you here are versions that emerged from our process, but they are only some of many possible settings and interpretations, and only 10 Sutras out of a cycle of 112! Every encounter with The Radiance Sutras has the potential to generate new versions, new revelations. The Sutras sing of the infinity of potential in all of us, each verse an invitation to awareness, to wake up to the extraordinary in the midst of the ordinary. The Sutras sing in everybody, and they sing for you.

“Are You Here?,” “Roar,” “Skin,” “That Kiss,” and “Who Am I?”:
Lyrics by Lorin Roche, Camille Maurine, Denise Kaufman
Music by Dave Stringer & Joni Allen
Published by: Magnetic Melodies BMI / Iron Dogg ASCAP / Green Ray Music BMI / Lorin Roche BMI / Camille Maurine BMI
All songs are based on The Vijñana Bhairava Tantra, translated and interpreted as The Radiance Sutras by Lorin Roche, PhD, and published by Sounds True SoundsTrue.com